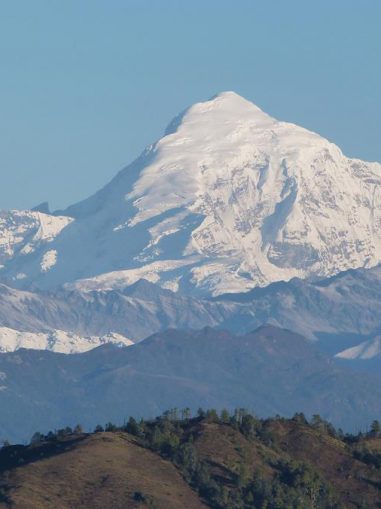 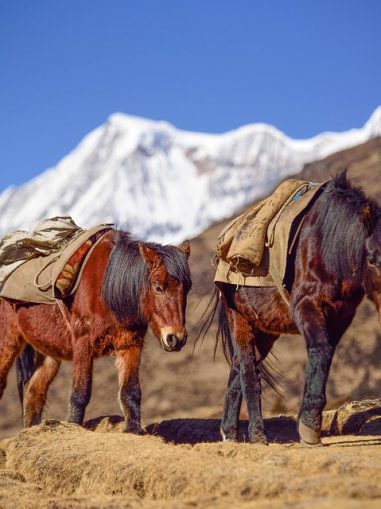 The flight into Paro presents stunning views of the Himalayan peaks, including the sacred Jumolhari (7,314m) and Jyichu Drake (6,794m) peaks in Bhutan. Our representative will be there to receive you at the airport and drive you to Thimphu (52 kms).
The first stop on the drive is to view the beautiful Tachocho Lhakhang (monastery), the hereditary place of worship for Bhutan’s Iron Bridge Builder. The drive follows the course of the Paro Chu until Chuzom where it joins the Wangchu River flowing from Thimphu valley. You cross the bridge and follow the Wangchu to the nation’s capital. Along the way you will come across farms, village homes and highway stalls selling organic vegetables and fruits as well as hardened cheese, the Bhutanese candy that can give you a prominent jaw line.
In the evening, stroll through the small and unique capital of Thimphu and experience its colours and rhythms.

Today is your tour of the capital beginning with a visit to National Memorial Chorten, a stupa dedicated to world peace and prosperity; the National Institute of Zorig Chusum where students train in Bhutan’s 13 traditional arts and crafts; Folk Heritage Museum which gives an insight into Bhutan’s rapidly disappearing rural past.
In the afternoon, you visit Changangkha Lhakhang, a fortress likes temple, perched on a ridge above Thimphu and the place from where the people in valley get their names from; Takin Preserve to see the Bhutan’s national animal which is associated with the country’s religious history and mythology; and Buddha point to see the 138.6 foot-high seated Shakyamuni Buddha statue. Buddha point offers a bird’s eye view of Thimphu valley.
Then you visit Tashichho Dzong or “the fortress of the glorious religion” which houses offices of the central government and the throne room of His Majesty the King. It is also the summer residence of Je Khenpo or Chief Abbot.

Today you drive to Punakha, Bhutan’s old capital. The first stop is Dochu La, a 3050 meters pass, from where you can see the eastern Himalayan range on a clear day.
The pass is also home to the 108 Druk Wangyal Chortens or stupas built by the eldest Queen Mother. From Dochula, you descend a winding road through lush forests of oak, fir, spurs, and rhododendron to the fertile valley of Punakha.

These water sports are done along the tributaries of the main rivers. On this trip, you have options of rafting along the Pho Chu (Male River) and Mo Chu (Female River), which join to form the Punatshangchhu River, further downstream. The Pho Chhu is famous among enthusiasts. Rivers course suitable for water sports. The Pho Chhu (Male River) is famous among enthusiasts. Rivers suitable for water sports
Option I: Upper Pho Chhu
Location: Punakha valley, Western/Central Bhutan
From/To: Wangthangka (a two-hour trek from the end of the road) – Samdingkha
Length: Approximately 7 km, 2 hours with scouting
Difficulty: Class III-IV Flow: 2000 -3000 cfs
Season: Mar/Apr, Oct/Nov. High water in this section will make this run very difficult.
Craft: Kayaks and Rafts.
Description:
The upper Pho Chhu is a great paddle through an open valley and worth the walking time to get there. There are a few good class IV rapids at the top, full of big boulders and big water moves. There is a good put in, just above the footbridge at Wangthangkha.
Immediately below the put in, the first class IV rapid can be scouted from the left. After this, we go around the comer and under the footbridge and scout the next class IV from the left. From here most of the rapids are boat scoutable, as the river eases up a bit, and there are lots of big, bouncy class III rapids and a few boulder gardens. Take out at the footbridge at Samdingkha, or continue another 7 km down to Punakha.
Option II: Lower Pho Chhu
Location: Punakha Valley, Western/Central Bhutan
From/To: Samdingkha – Punakha (directly below the Mo Chhu confluence)
Length: 7km, 1.5 hours
Difficulty: Class III with one IV at the bottom Flow: 2000 -3000 cfs
Mar/Apr, Oct/Nov. should be runnable at high water.
Craft: Kayaks and Rafts.
Description: The lower Pho Chhu is much easier than the upper section, with plenty of class III and a good class IV finale. This is currently the most popular rafting tour, since it is not too difficult and a beautiful half-day raft trip. From Samdingkha, the river meanders through a wide-open valley, full of rice fields and farmhouses. About 4 kilometers down is Strainers Paradise, a class III boulder choke. From here, there are some nice wave trains until the grand finale. Right below Bhutan’s longest footbridge is Wrathful Buddha, a class IV. Take out is right after the confluence with Mo Chhu, next to the impressive Punakha Dzong.

Option III: Mo Chhu – Tashithang Devil’s Gorge Section
Location: Punakha Valley, Western/Central Bhutan
From/To: Tashitang (end of the road, about 2-hour’s drive from Punakha) – Punakha Dzong (directly below the Pho Chhu confluence)
Length: 12 km, 5 -7 hours with scouting
Difficulty: Class V Flow: 1000 cfs, Feb/Dec. Higher than medium flows will make this run dangerous. A high water run is not recommended.
Craft: Kayaks only, this is much too difficult and steep for a raft.
Description: The upper Mo Chhu from Tashithang has lots of class V, with a gradient of about 300 feet per mile. There is a short stretch of flat water about six kilometers down, the end of which marks the start of the Devil’s Gorge, a step up from the whitewater above. There is little access to the road, so paddlers attempting this section of river should be ready to commit to the whole thing. For those, not wanting to bite off such a big chunk of hard whitewater, check out the alternative put in for the upper stretch, described below (Mo Chhu – Upper Run).

Option IV: Mo Chhu – Upper Run
Location: Punakha Valley, Western/Central Bhutan
From/To: 14 km above Punakha – Sonam’s Put In Length: 3 km, 1.5 hours with scouting Difficulty: Class IV -V Flow: 1500 – 2000 cfs, Mar/Apr, Nov/Dec
Craft: Kayaks only, too difficult for a raft.
Description: From this put in the gradient reduces slightly, although the rapids are still continuous class IV with several class Vs, which may need scouting. At the put in, the first rapid, Whiplash, can be scouted from river left. After Whiplash, the river continues to drop away in horizon line after horizon line. After about two kilometers, there is a short piece of flat water, recognizable because it is the only flat water on this section. This marks the start of a long, two-part class V rapid called Paula Jones. About one kilometer of class IV remains after Paula Jones, and the section ends with Baba Raj, a class IV that can be scouted from the left. Take out here, or continue downstream.

On the return journey, stop at Dochu La for lunch. On the way visit Semtokha Dzong the first Dzong built by Zhabdrung Ngawang Namgyel in 1629. Spend the evening exploring Paro town.

You will hike about 2 hours uphill to the Taktsang monastery, which clings to a huge granite cliff 900 meters above the valley floor. It is believed that the great saint Padmasambhava came here in the 8th century on a flying tigress and meditated in a cave. It is a pilgrimage site for every Bhutanese.
In the afternoon, visit Drugyel Dzong, the fort that defended the Paro valley from invasions from the north in the early 17thcentury. On a clear day, you can see Mount Jhomolhari 7314 meters from here. You can either drive to Drugyel Dzong (14 kms) or cycle there following the highway.
Later, visit the auspicious Kyichu Lhakhang, built in 659 A.D by the Tibetan king Songtsen Gempo. This is one of the 108 monasteries built across the Himalayan region by the Tibetan King to subdue the Demoness that lay across the Himalayan region. The rest of the monasteries lie in other neighboring countries.

You will drive to the Paro International Airport for your onward journey.